Red Forecast, a 45-minute multimedia work for soprano, orchestra, video, and taped audio news, is the third and final segment of Tan Dun’s Orchestral Theatre series (1990-96). Together, these works not only address philosophical issues but present an overview of Tan’s life. (As the year 1996 marks the tenth anniversary of Tan’s arrival in the West, perhaps it is understandable that the completed Orchestral Theatre trilogy has taken a retrospective turn. The idea of “journey,” a potent metaphor for Tan, is also the leitmotif of his other major work from 1996, the opera Marco Polo.) Orchestral Theatre I: Xun (1990), commissioned by the BBC for the Edinburgh International Festival, evokes a Chinese village celebration through the use of ethnic instruments and vocalizations; Orchestral Theatre II: Re (1993), a “ritual of sound, space, and silence” commissioned by Suntory Hall in Japan, employs chanting to simulate an imaginary Tibetan spiritual ceremony. Red Forecast: Orchestral Theatre III(1996), cloaked in a Western, pop-tinged score, mulls over existential questions: Where has humanity come from? Where and how far are we going? How will things end? Two worlds collide in the completed Orchestral Theatre cycle: East and West, the primitive/shamanistic and contemporary/urban, the spiritual and secular. These worlds — Tan’s past and present — interact with each other like chemical reactions, the resulting mix providing the key to his future.Read Morehide

Red Forecast operates simultaneously on different levels, as do many of Tan’s compositions. Three primary layers are counterpointed in this work: music (which includes the sound of news in five languages), video images, and dramatic lighting. Two subjects frequently referred to in the piece’s texts and images play important symbolic roles: weather and the 1960s. Weather serves as a metaphor for history: unpredictable and unalterable, yet dynamic and occasionally violent. The 1960s symbolize idealism for Tan. Neither a political statement nor a nostalgic remembrance, Red Forecast is instead a spiritual reflection, a lament. Must we accept the loss of passionate idealism and traditions as the price for sophisticated technology and humanity’s development in urban society? (This dilemma is Tan Dun’s “unanswered question.”)

The score to the six-movement Red Forecast blends classical pop, rock, and Western jazz with meditative music alternately medieval or Mahlerian; strains of Taoist funeral bands and snippets of tunes from the 1960s recur like memories. (“Storm and Documentary,” the piece’s fifth movement, develops a surrealistic collage from several well-known political melodies: “We Shall Overcome,” “The Star-Spangled Banner,” “The International,” and two warhorses from China’s Cultural Revolution, “The East is Red” and “Journey on the Sea Depends on the Captain.”) Reiteration of two important elements from Orchestral Theatres I and II, shouted phrases and emphasis on the pitch D, represent the continued influence on Tan of his musical past and help unify the cycle. Tan also addresses different meanings of the term “theatre” in this trilogy. Whereas Orchestral Theatres I and II had explored the concept of ritual as “theatre,” Red Forecast assumes characteristics of a Western drama. Sparsely scored to allow flexibility for spatial treatment, Red Forecast moves musicians and sound around the hall like “actors” in a play.

Red Forecast’s video component, created by Mike Newman, features archival footage from the 1960s that includes historical events and figures as well as home movies of domestic life. These images, structurally interwoven with the music, provide ironic commentary. (The audience “participates” in Red Forecast through its experience of this collage of familiar, yet evocative images and sounds from the popular media.) The piece’s final movement, “Sunshine,” both commemorates those victims of oppression seen in the video montage and is a “lovesong” to nature and the future. By the conclusion of Red Forecast, all video images gradually transform into pools of red light, a color that symbolizes for Tan change, revolution, and passion. The musical atmosphere becomes optimistic and transcendent, and the meaning of the work’s enigmatic title now becomes clear. The prediction (forecast) for humanity is one of renewed passion (red); we will recapture our idealism and spiritual strength.

The Orchestral Theatre series had its origin in some musings about the place of music in the world, and of humanity in society and in nature. Music which clearly separates the role of performer from listener, of orchestra from audience, seems usual to modern concert-goers. Actually, such isolation began only a few hundred years ago, while the history of music as an integral part of spiritual life, as ritual, as shared participation, is as old as humanity itself. The idea of an “orchestral theatre” gradually came to me as a way of finding this lost unity and bringing the performing arts back to the audience. I began to see the orchestra itself as a dramatic medium which could once again bridge the creative and the re-creative, completing the circle of spiritual life. 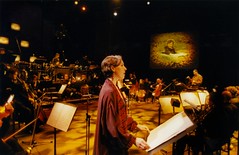 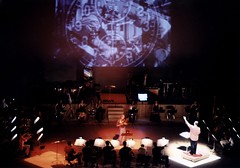 “Mr. Tan’s ambitions here involve nothing less than a restoration of the ”lost unity” between music, daily life and spiritual life. Through [Red Forecast] listeners are invited to reflect on humanity’s past, present and future.”