In writing Orchestral Theatre II: Re, I realized that not only were the orchestra and conductor present in the concert hall, but also the public who experience the music. I thought about the rituals familiar to me since childhood and realized that in a ritual there is no audience, only participants. I understood that the conductor’s role as high priest of the orchestra should also extend to his control over the entire performance space and all those within it, musicians and audience alike. The work is sharing the audience’s traditional space in a ritual of sound, space, and silence.

Two thousand years ago, the Chinese philosopher Lao Tse said that the greatest sound can be heard only in silence. I have become very interested in silence, and the dynamics within it. I have begun to thing of rests as positive forces, as “singing melody” which bridge dynamic contrasts and create active links within the musical structure. Silence also creates the opportunity for us to hear the unexpected, both within and outside of ourselves.Read Morehide

Similarly, by using the single pitch ‘re’ as the main material for this work, I provide an opportunity for all to hear other things in the orchestra than the expected melody, harmony and rhythm. Timbral development in this piece includes voice, not only of the bass soloist, but also of the two conductors, the entire orchestra, and the audience. Vocalization by the bass and conductors, from the Chinese philosopher Lao Tze and the Tang dynasty poet Liou Zhong Yuan, is both quoted and in a deconstructed form.

Finally, I ask that the audience cooperates in the performance of this piece by following the conductor and vocalization at certain moments. Please read the following instructions carefully before the performance.

There are two places in which the audience is requested to participate in Orchestral Theatre II: Re. The conductor will rehearse the audience for several minutes just before the piece, and establish a method of cueing; he will raise his left arm to signal that the audience’s.

The Orchestral Theatre series had its origin in some musings about the place of music in the world, and of humanity in society and in nature. If we look at the idea of ‘art music’ with its firm separation of performer and audience, we see that its history is comparatively short. Yet the history of music as an integral part of spiritual life, as ritual, as partnership in enjoyment and spirit, is as old as humanity itself. So the idea of an “orchestra theatre” gradually came to me as a way of bringing the isolated performing arts back to people, back to the audience. Music can once again become a ritual bridge between the creative and the re-creative, completing the circle of spiritual life. So I began to ask myself some concrete questions: How — or if — a classical orchestra could sound not classical? Could it convey the sense of another culture, a ritual of instruments and vocalization? Could this, which is common in Chinese theater and folk celebration, be done with a Western orchestra? What would primitive sounds be like with Western harmony? I began to see the orchestra itself as a dramatic medium, as theater. 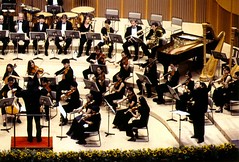 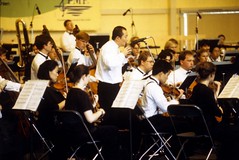