The symphony is divided into three movements: Heaven explores the traditional past of the Chinese people; Earth explores the equilibrium between nature and the elements; Mankind commemorates those who fought and suffered in wars.
Read Morehide

Periodically the earth surrenders one of her secret treasures. In the summer of 1978, excavations at the tomb of Marquis Yi of Zeng, in Hubei province, uncovered 65 bronze bells, known collectively as abianzhong and used for ritual and ceremonial occasions, which had been buried since 433 BC. These 65, 2400-year-old bronze bells, arranged in three rows on an elaborate L-shaped frame, were decorated with a gold inlay and depicted dragons, beasts, and flowers. It is believed that it took six people using wooden mallets to make the bells sing. Tan Dun’s Symphony 1997, commissioned to commemorate the reunification of Hong Kong and China, features this legendary bianzhong in a dramatic montage that captures the panorama of human history and the longings of our spirit.

Yo-Yo told me, smliling, one day in Tanglewood: “Vibrating bianzhong, singing with the sound of 2400 years ago. That’s my deepest dream.”

“When we so carefully opened the tomb, my body was shaking. My eyes were wet. I couldn’t believe the huge set of bianzhong standing in front of us, waiting, for us for 2400 years. Delivered from another world of which we knew nothing.” (Tong Zhong Liang, Bianzhong scholar)

Listen to the innocent voices of these Hong Kong children. They’re the future of Hong Kong. In this piece I pair them with the bianzhong, the voice of China. They are bridged by the cello, a storyteller. Everything has a past and a future. As a composer, when I hear these innocent childrens’ voices, I feel they are chanting the past. When I listen to the sound of the bianzhong, I sense it is singing the song of the future. Maybe there really is no distinction between the past and future — everything is a circle.

There’s a tradition in Hong Kong’s Temple Street — in the evening many street opera companies sing and perform their sadness and happiness in the road. These people carry the soul of Hong Kong, they sing its stories. I stop in Temple Street at least once whenever I’m in Hong Kong. But last time, to my great surprise, I found only one company playing there. Where were the others? The tradition is dying,  as it is everywhere in the world. So I recorded the sound of Temple Street, and used it together with the cello solo in Symphony 1997. I hope this will not be the last opera of Temple Street.
2400 years ago, the people of the Zhou dynasty buried the bianzhong — never imagining that the bells would be played again, all these years later, to make the music for Reunification. 2400 years from now, I hope people can still hear the street opera in Temple Street. I wonder whether they will be able to comprehend us. Has anything on earth never died? Except music, what else?

4. Reunification
Every artist searches, everyday, to discover the unity of the eternal and external. In my opera Marco Polo I imagined Mahler and Li Po talking together, in their “Song of the Earth.” In Li Po’s poetry and Mahler’s music, we hear not only the love of the earth, but also the sound of heaven and the song of mankind. Li Po thought that heaven, earth, and mankind were symbiotic, that everything in the world was one. Our ancestors thought true concordance was the perfect unification of heaven, earth, and mankind. I believe Li Po and Mahler thought so, and Beethoven and Schiller too.

I dedicate Symphony 1997 to the people who wish to love and be loved.

Tan Dun begins with the haunting voice of the solo cello: an ancient spirit that has witnessed and meditated deeply upon the turbulent past. Children’s voices, angelic and pure, join the cello’s voice of fate, which foresees the future and unifies all. We remember that war and peace have been our eternal companions.

“Jasmine Flower,” a revered Chinese lovesong and further immortalized in Puccini’s Turandot, offers fragrant blossoms to one’s sweetheart. This folksong links the heavens and the bianzhong’s underground tomb through its simplicity:

In the exuberant Dragon Dance, large colorful paper serpents snake through crowded streets at Chinese New Year’s; their sensuous Phoenix, with flowing melodies and harp cascades presents the yin to Dragon Dance’s vigorous yang. Together the heaven-dwelling, life-giving dragon (a symbol of the Emperor) and the Phoenix bird (his Empress) symbolize good luck. In Jubilation strands of Beethoven’s “Ode to Joy” and a raucous Chinese folk song gradually blend into a collage of celebratory songs and traditions.

The Empress in Opera in Temple Street, accepting fate, poignantly sings farewell to the Emperor.

In his independent concerto for bianzhong, cello solo and orchestra, entitled Yi3, Tan creates music more abstract and typical of his art. Responding to the Yi-Ching’s teaching that change is continual, Tan conceived a series of Yi concerti as a way of balancing the visible (“that which already exists”) and the invisible (“the which has not yet come to be”); each concerto superimposes a new work for solo instrument on his ppre-existing Yi0 for orchestra. (Yi3 is actually a further development of Yi1 for cello and orchestra.) Musical materials are not mixed haphazardly” Tan discovers relationships or similarities between the elements and then weaves them together into a new entity.

A variety of mallets and brushes displays the bianzhong’s nuanced tonal shadings as crip, snappy rhythms reveal its technical abilities; the cello’s obbligato borrows performing techniques from the Erhu and Mongolian fiddle. Passages of tolling bells frame the work’s central section, in which the voice of nature sings with carefully sculpted sounds alternately peaceful and magical, dance-like, or dark and foreboding. Water, Fire, and Metal signify that equilibrium is necessary between nature and the elements.

A vignette, adapted from a recent film soundtrack composed by Tan Dun, commemorates those who fought and suffered in wars, especially the Opium War and World War II.

In Lullaby, a lamenting parent sings to his child:

“Don’t cry Nanjing, my baby.
See all the boats sailing on the swiftly flowing Yangtze
Give her a kiss if you meet the Moon;
Send him your regards if you see the Sun.

Song of Peace, blossoms with joyous melodies, although wartime’s drums are not yet far in the past; children’s voices, optimistic but worldwise, look to the future. Written in the spirit of Li Po and recalling Schiller’s text, “Ode to Joy,” Tan’s culminating anthem seeks the reunification of nature and soul in an enduring, harmonious world order.

Heaven, Earth, and all Mankind
Listen!
The bells which no longer sound “farewell” knock at spring’s door,
The wind of winter past blows the bugle of jubilation,
The drum no longer announcing war, plays with everlasting
Harmony,
The mother, no longer crying, sings of joyous peace.
Ah! Heaven, Earth, and Mankind are symbiotic.
Everything in the world is one. 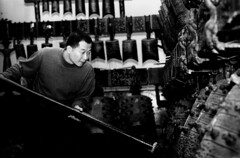 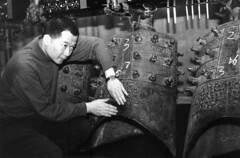 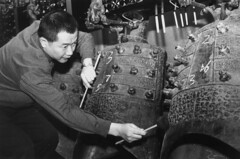 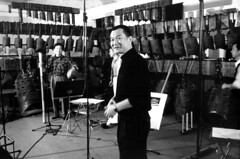 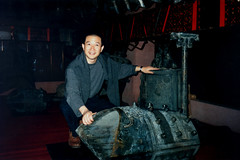 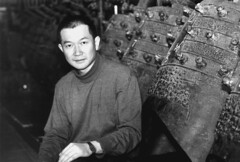 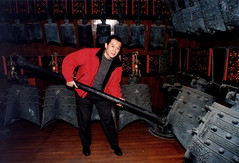 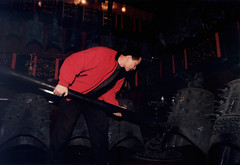 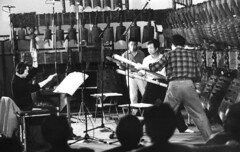 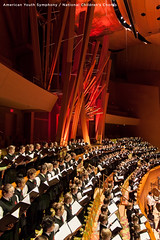 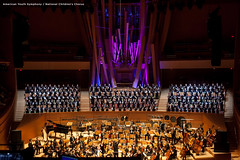 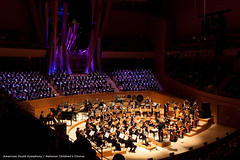 “This, musically, was the full-body experience: open-hearted music with a widescreen sweep, with funky, pounding, irresistible rhythms…. Visually and sonically I have witnessed nothing like it.”