Ghost Opera is a five-movement work for string quartet and pipa, with water, metal, stone and paper. The composer describes this work as a reflection on human spirituality, which is too-often buried in the bombardment of urban culture and the rapid advances of technology. It is a cross-temporal, cross-cultural and cross-media dialogue which touches on the past, present, future and the eternal; employs elements from Chinese, Tibetan, English and American cultures; and combines performance traditions of the European classical concert, Chinese shadow puppet theater, visual art installations, folk music, dramatic theater and shamanistic ritual.

In composing Ghost Opera, Tan was inspired by childhood memories of the shamanistic “ghost operas” of the Chinese peasant culture. In this tradition, which is over 4,000 years old, humans and spirits of the future, the past, and nature communicate with each other. Tan’s Ghost Opera embraces this tradition, calling on the spirits of Bach (in the form of counterpoint quotation from the Prelude in c sharp-minor of Book II of “The Well-Tempered Clavier”), Shakespeare (setting brief excerpts from “The Tempest”), ancient folk tradition and earth/nature (represented by the Chinese folk song “Little Cabbage”). The Bach excerpt acts as “a seed from which grows a new counterpoint of different ages, different sound worlds and different cultures.” In the final movement the gradual transformation of the counterpoint brings the spirits of Bach and Shakespeare, the civilized world and rational mind – “this insubstantial pageant” – into the eternal Earth.

The installation employs paper, shadow, and water gong basins placed around the theater. The performers’ movements among the seven positions reflect the back and forth movement between different time frames and spiritual realms which is characteristic of the “ghost opera” tradition.Read Morehide

Tan Dun, one of the most celebrated composers of his generation, unites Chinese shamanistic traditions with the western avant-garde reaching audiences through venues from the Concertgebouw, Avery Fisher Hall and Suntory Hall to the Guggenheim Museum and La MaMa ETC. This year, Tan will be the featured composer at the Ultima Festival (Oslo), the Festival d’Automne (Paris), the BBC Proms (London) and the Helsinki Biennale which hosts the world premiere of his cello concerto Intercourse of Fire and Water: Yi. His opera on the spiritual journey of Marco Polo, commissioned by the Edinburgh Festival, with a libretto by Paul Griffiths, will be premiered in 1996 by the Munich Biennale, the Munich State Opera and the Holland Festival.

Tan has received many international awards and commissions, and in 1993 became the youngest composer ever to win the prestigious Suntory Prize Commission from Toru Takemitsu. In 1994 he was invited by Hans Werner Hanze to serve on the jury for the BMW International Music Theatre Awards at the Munich Biennale. His works have been selected for major festivals around the world and have been broadcast often by National Public Radio, the BBC and Berlin Radio. His music has been the subject of television and film documentaries by Finnish Television (featuring Tan and Lutoslawski), the BBC (music for ceramics) and Dutch television (featuring Adams, Lachenmann, Tan and Vries). In 1994, the recording of his orchestra music O Taoism (on Koch-Schwann) was selected by BBC Magazine as one of the best CD’s of the year. Tan is also active as a conductor in special programs of 20th century music. During the coming year he will conduct the BBC Scottish Symphony, the London Sinfonietta, Contrechamps (Geneva), the Nieuw Ensemble (Amsterdam) and New Music Concerts (Toronto).

Tan Dun was born in 1957 in Si Mao village in central Hunan, China and spent his early childhood with his grandmother, growing up amidst the ancient culture of a rural Chinese village. After planting rice for two years during the Cultural Revolution, and then working as a fiddle player and arranger for a provincial Peking Opera troupe, Tan was selected for the Central Conservatory of Beijing where he spent eight years. He came to New York City in 1986 to take up a fellowship at Columbia University, and completed the doctoral program in composition, studying with Chou, Davidowsky and Edwards. His music is published by G. Schirmer. 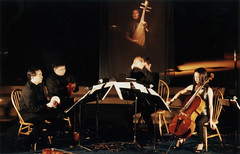 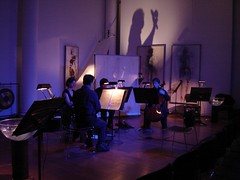 “The hushed enchantment of Tan Dun’s 1994 Ghost Opera weaves the ancient mysteries of the composer’s homeland into a poetic ritual that incorporates the music of Bach at its most yearning and words of Shakespeare that pre-empt the existential.”