Tan Dun’s Contrabass Concerto: Wolf Totem was commissioned by Royal Concertgebouw Orchestra Amsterdam, Royal Liverpool Philharmonic, St. Louis Symphony, Taiwan Philharmonic (NSO), and the Tasmanian Symphony Orchestra. The Principal Bass Player in each of these orchestras is the featured soloist in their local performances. While composing, Tan Dun consulted frequently with Dominic Seldis, the Principal Double Bass player of the Royal Concertgebouw Orchestra. In this concerto Tan Dun richly gives voice to both the velvety expressive sound and also the virtuosic propulsive percussive abilities of the contrabass.

At the time when Tan Dun began conceptualizing this concerto he had recently finished reading the Chinese novel “Wolf Totem” by Jiang Rong. Written as a period epic novel and fable for modern days, the novel depicts the dying culture of the Mongols-the ancestors of the Mongol hordes who at one time terrorized the world-and the parallel extinction of the animal they believe to be sacred: the fierce and otherworldly Mongolian wolf. Imbued with the history of the ancient Silk Road culture – “Wolf Totem” resonated deeply with Tan Dun’s personal connection and fascination with the spirits of the natural world and the sounds and customs of the ancient cultures along the Silk Road. The symbol of the Mongolian wolf and its life in the grasslands for Tan Dun is a mirror of the human spirit and our relationship to the natural world.

“The Wolf” is in the traditional concerto format of three movements – with two outer movements full of dynamic colors and rhythmic drive surrounding a slow and strikingly lyrical middle movement.

The first movement opens quietly with an atmosphere of mystery and melancholy of the soloist accompanied by the orchestral bass section in harmonics and the haunting sounds of Tibetan singing bowls. Following this extended song in the solo bass, the music expands gradually into a depiction of the running of the wolves and wild horses across the Mongolian grasslands. Rhythmic patterns in the brass, winds, percussion, and pizzicato strings drive the movement forward. The melodies travel around the orchestral sections while the solo bass – the wolf – also takes up the running gestures to drive the movement faster and faster to its close.

The song-like second movement which places the soloist front and center with long melodic lines over a simple orchestral accompaniment, depicts the loneliness of a young wolf missing it’s mother; missing the sky and grasslands of its home. This intensely lyrical and tender movement offers the soloist an opportunity to revel in the rich singing sound of the contrabass.

The final movement returns us to the scene of the running horses, heard in the galloping rhythms of the orchestra while the soloist alternates between the lyrical and percussive capabilities of the instrument. In contrast to the previous movement, the solo line is dominated by large interval leaps alternating with pulsing notes reaching a dramatic heart shaking climax, like a howling wolf, passionately calling upon us with compassion in our hearts to protect Mother Nature. 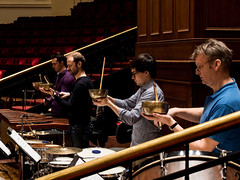 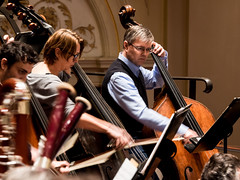 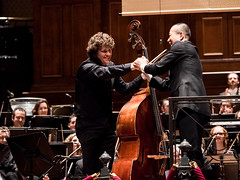 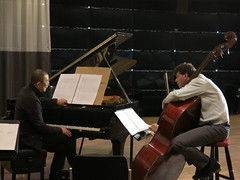