The work begins and ends with the sound of water. Tan goes beyond the traditional telling of the Passion by beginning with Christ’s baptism and ending with an evocation of resurrection, suggesting, in the words of Ecclesiastes, “a time to love, a time of peace, a time to dance, a time of silence…” Water also serves as a powerful visual image. The stage is defined by seventeen transparent water bowls, lit from below. These form a large cross that separates the playing areas for the two choruses (one of sopranos and altos, one of tenors and basses), the two soloists (soprano, bass) and the two string players (violin, cello). Three percussion players take their position at three ends of the cross, with the conductor at the fourth. The very first words heard in the new Passion, “A sound is heard in water,” are echoed by the gentlest of drops from the percussionists. All of the performers play pairs of smooth-contoured stones, specified by the score to be “from the sea or a river.”

Tan uses a remarkably wide range of vocal styles, from the overtone singing of Mongolia to what he calls the “calligraphic” high-pitch writing of Peking Opera. These techniques are combined with chorale-style four-part writing for the chorus and declamatory recitatives for the soloists, which pay homage to Bach’s Passions. Tan generally sets the words of Christ with a tenderness and directness that set them apart from the otherwise elaborate vocal writing.

Varied cultural influences also shape the string writing. Tan draws upon instruments that evolved along the ancient Silk Road, from the cello-like Chinese erhu to the Mongolian horse-head fiddle, to the kemanche, a lap-held fiddle common to several Middle Eastern cultures. Although the players use a conventional Western violin and cello, they find an extraordinary range of sounds – bent pitches, microtones, long melismatic melodies, and an entirely different tuning of their strings in the second half. The two solo singers play the xun, an ancient Chinese ceramic flute. All of the acoustic sounds are subjected to electronic processing; a digital sampler adds another source of “found” sounds.

The text is drawn largely from the Gospel According to Saint Matthew, with brief poetic reflections written by the composer. The work is divided into two halves. Read Morehide

Part One
Baptism
The Water Passion begins in mystical ritual and soft, indefinable sounds. The chorus men chant, notated in circular form. Voices overlap as they proceed around the circle of notes. “There is no beginning, no ending, only continuing,” writes Tan. A melodic phrase emerges which will become a significant recurring gesture: the chorus sopranos sing “a sound is heard in water.” Just as Bach used different settings of the same chorale to characterize the spiritual progress of the St. Matthew Passion, Tan employs this as his own “passion chorale”. It is the first melodic line to take shape and will be the last.

The strings begin an impassioned declamation, with sections left to improvisation. The bass-baritone narrates the baptism of Christ, and the Soprano’s response alternates between her highest range and a lyrical statement of the “chorale” melody. The men of the chorus introduce the recurring “chanting of monks”, which fluctuates around the interval of a fourth, with unusual vowel sounds that produce complex overtones not usually found in Western music.

The movement concludes by juxtaposing the “monks’ chant” in the basses with the “passion chorale” melody in the sopranos. “I love Bach’s counterpoint,” explains Tan, “not just as note against note, but also as language against language, image against image, culture against culture.”

Temptations
A relentless rhythmic drive characterizes this movement. The percussion set up the steady pulse, punctuated by harsh consonants from the chorus. The devil, in the guise of a temptress (Soprano solo) tempts Christ from his faith with insinuating vocalism. “I was very much influenced by Balinese and Indonesian ritual music,” Tan acknowledges. The bass-baritone portrays Christ’s affirmation of faith, banishing the tempting spirits.

Last Supper
The choral men sing the “passion chorale” but the water becomes tears, “crying for truth.” Christ performs the rites of the sacramental bread and wine; he prophesies that one of the disciples will betray him. A fragmented choral outburst of “is it I?” reveals their anxiety. Christ repeats the prophecy, the music becoming a lamentation.

Water Cadenza
The last symbolic offering of Christ’s blood gives way to a cadenza for water percussion: amplified, distorted and put in motion by electronic processing.

In The Garden Of Gethsemane
As the disciples sleep, Christ prays. The chorus men chant “Eli Eli lamala”, which will be Christ’s words on the cross. The chorus’ Tibetan bells and the percussion herald his betrayal; a chorus of “arrest him” builds above the pandemonium. Each time Christ answers with calm assurance, the rhythmic pounding responds with frightening intensity. The disciples flee. The chorus sings the “passion chorale”, with the tears of the recurrent water imagery now crying for silence.

Part Two
Stone Song (Peter and Judas)
A violin solo is punctuated by the percussionists playing the stones as pitched instruments, using the mouth as a resonating chamber. The “passion chorale” returns, now harmonized with chromatic darkness and uncertainty. Peter repeatedly denies Christ, and the chorale resumes, the “sound in the water” transformed to bitter weeping. Judas confesses his betrayal. Again, the chorale sounds. A sorrowful epilogue for strings is accompanied only by the rubbing of stones.

Give Us Barabbas!
Another scene of mob hysteria. The chorus plays the stones in sinister, pounding rhythm, growing into a frenzy of mockery, with shrill, swooping laughter. After an agonizing silence, the crowd chooses to spare the thief Barabbas. Christ answers the taunts with humility. This enrages the crowd further, but Christ can only pray for their forgiveness. For Tan, “The crucifixion – this moment of highest suffering and greatest sorrow – released images of torment, humiliation, and the arbitrariness of power during the Cultural Revolution.”

Death And Earthquake
A lone voice sounds in sorrow. The cello’s lament rises to unbearable anguish. The monks’ chant is heard again. Christ speaks his last plea to God. As Christ dies, the earth breaks apart with the unbearable pain of the moment, expressed in an instrumental outburst of shattering intensity. The cry of the xun is heard for the first time, the low, wavering tone of this ancient wind instrument like an unearthly voice breaking with grief.

Water And Resurrection
A gentle rhythm on the water drums, as darkness gives way to light. The men sing the chorale melody, finding darkness in the sound of the water. The women respond again with the chorale melody, now finding “in water, the sound of innocence.” The main musical materials of the work are brought together in a glowing chorus of affirmation. The bass-baritone soloist, as Christ, heralds “A time to love, a time of peace.” At the end of this religious drama, the performers go to the water bowls, ending the work as it began, with the sound of water.

When I read the account of the Passion in the Bible, I heard the wind, the sound of the desert. Perhaps for other readers of the Passion, every image is red and bloody – but instead I always felt the desert heat, and heard the stones and the water. So I shaped the story through those sounds, giving the element of water an important theme. Not only does it stand for baptism, but also for renewal and rebirth. It is cyclical. Water evaporates, becomes clouds, rains to the earth, and evaporates again. The sound of water is in my composition like a passacaglia theme – it is always present.
— Tan Dun, excerpted from “Buddha Bach,” Die Zeit, 2000

What attracted to you to the Passion Story?
Tan Dun: I was nervous about presenting a story that has lived in peoples’ hearts in another culture for thousands of years. But I was excited because it is such a powerful, dramatic, operatic story. And I thought, we are in a global village now, this very powerful story must be shared. So I said I would do it.Read Morehide

What aspects of Chinese music and culture inform the Water Passion?
Tan Dun: The water festival in China, Yunnan province. In April, to celebrate spring coming, they have a water-pouring festival; everybody gathers huge amounts of water on the street and throws it around. The whole town was wet – everyone was wet. Also, in my hometown, in ancient times and even in my childhood in the village, the people were always washing rice in the river before they cooked it, and washing their clothes in the river, washing their bodies in the river. I had the experience of living with the water, playing with the water, listening to the water. It was very important to me.

Several of your other works just before this used water and water percussion.
Tan Dun: Three or four years ago, when my wife was pregnant, we went to the doctor for an ultrasound, and there I could see this beautiful baby and hear the heart. Suddenly I heard this beautiful water sound and I realized: this is the sound all human beings hear first. At that time I had just gotten the commission for the Water Passion. I said, “I’ve got to start with water” – it’s the beginning, and the beginning is the ending, and the end is the beginning. That’s the meaning of resurrection. Resurrection isn’t just a new life, but a new idea.
— Brett Campell, Andante.com, July 2002

Water, a metaphor for the unity of the ephemeral and the eternal, the physical and the spiritual — as well as a symbol of baptism, renewal, re-creation and resurrection — played a key role in the conception of my Water Passion after St. Matthew. Using a “Water-Instruments-Orchestra,” as well as the Xun, an ancient ceramic instrument; fiddling techniques of the Silk Road cultures; and solo and choral vocalizations from my “Sound Map of One World Tradition” – which features monk chanting, Tuvan overtone singing, and the high-pitched calligraphy of Eastern Opera traditions…Water Passion after St. Matthew is musical metaphysics and drama based on the story of Jesus’s Passion according to St. Matthew.
— Tan Dun, 2000 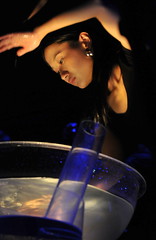 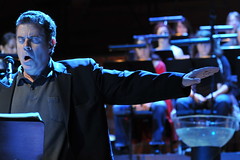 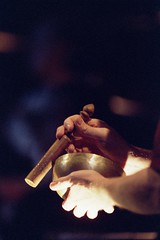 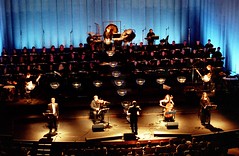 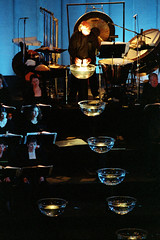 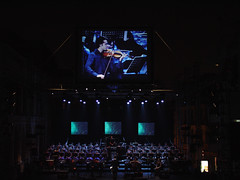 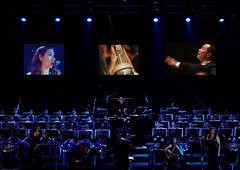 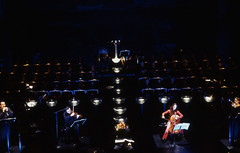 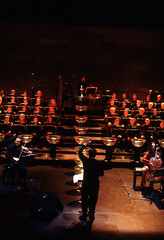 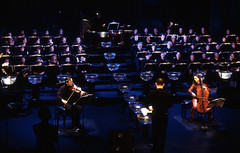 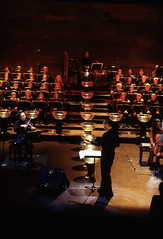 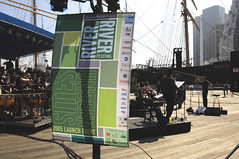 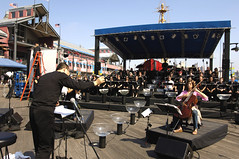 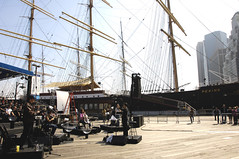 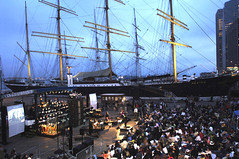 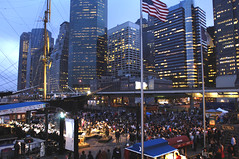 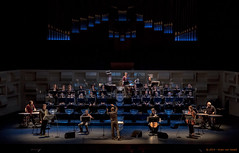 [Water Passion’s] images are unlike anything that the average Western audience will have encountered in a concert hall before. Yet its world premiere in Stuttgart…was greeted with an ecstatic 15-minute standing ovation. Like its model, Bach’s St. Matthew Passion, it transcends language, cultural and religious divides.
– The Times, London, 2000