On 21 January, 2011, opera star Placido Domingo celebrated his 70th birthday in the city of his birth – Madrid. At the Teatro Real, in the presence of the Queen of Spain, a host of international stars, including Bryn Terfel, Dolora Zajick and René Pape, performed in his honour, singing music by Verdi, Wagner, Mozart and Puccini, among others.

The concert featured the world première of a new orchestral work, Symphonic Opera of 3 Notes, by Tan Dun, best known for his score for the film Crouching Tiger, Hidden Dragon. This so-called “Symphonic Opera”, inspired by Domingo, showcased the Orchestra of the Teatro Real as they sang, stomped and chanted, as well as played their instruments conventionally.

This piece is based on the notes A,B,C – also known as la-si-do.

Listen to Symphonic Poem on 3 Notes on Apple Music & Spotify

The three solfège pitches LA, SI and DO have always reminded me of the abc phenomenon – the meaning of things starting, of beginning and the origin of everything. I was fascinated by how this idea became a metaphor for man and nature’s life and spirit. One day I received a phone call from the Teatro Real Opera in Madrid, they were planning a surprise seventieth birthday celebration for Plácido Domingo and called me to ask whether I could write a work for the occasion. Instantly I said yes! Since working with Plácido on my opera The First Emperor, he has truly become one of my dear friends. When first imagining the piece, I thought it very celebratory to use Plácido’s name as part of the music – when you rap his name “Plácido” it sounds like LA SI DO. I used the notes LA SI DO/A-B-C to form the musical theme of this symphonic poem. The beginning of the piece echoes the start of new life, like a dream it unfolds with the sounds of birds, incense, wind and rain – the tubular chimes start to sing and LA SI DO appears for the first time. This theme then unfolds in a variety of textures: symphonic rapping, instrumental and vocal hip-hop, blowing sounds and stones. Through the course of the piece, the industrial break drums and car wheel sounds join in representing nature and life growing and progressing into cities and societies. The climax erupts with the rapping and shouting of PLA CI DO and falls with chanting and foot stamping as these three notes return back to nature, back to the origin and back to the future. Fortunately in the end, I had help from the Audi Summer Festival in Shanghai to finally finish the piece and I called it Symphonic Poem of Three Notes in celebration of my friend Pla-ci-do. 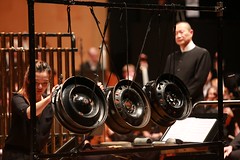 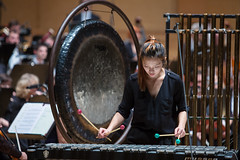 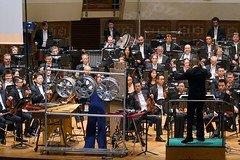 “The evening concluded with the première of a new work by Tan Dun entitled ‘Pla-ci-do’, which was described by spectators as ‘a sexy version of Happy Birthday’.”