This work is commissioned by the New York Philharmonic, written for my friend Lang Lang. To me, writing for the piano is a challenge. The instrument has a specific character, yet it can be like an orchestra in itself; it is the fire and the water. I am a string player, but I also play percussion. These are the elements of life: fire, which is percussion, and water, which is strings. Beneath the surface, I find many things about the piano that reflect my own life.

I recall these ritual fire dancers from my grandmother’s village, floating on the fish pond, talking to the flowers, birds, and rocks, freely shifting their story between last life and next life, transforming limits into the unlimited, making water like fire. It is with these memories that I started to write the piano concerto.
Read Morehide

This concerto is a very percussive piece. Not just the piano itself, but the orchestral percussion featured as well: Taiko drums in the first movement, gongs in the second, and xylophone, marimba and vibraphone in the third. The three movements contrast between simplicity and complexity. The first movement is percussive, with orchestration of burning taiko drums. Like a martial artist, Lang Lang uses his fingers, fist, palm and arms to play. The second movement is lyrical. Lang Lang strums the keys like an oriental plucking instrument in a lyrical staccato that sings with the remote echo of water gongs. This movement is about love and confrontation. In the third movement, this lyrical staccato begins to burn with a complexity that develops elements from the previous two movements. Here, the piano enters into a dialogue with the percussive keyboards including the marimba, xylophone and vibraphones.

At its essence, this piece searches for harmony between contrasting forces: water and fire, percussion and strings, simplicity and complexity, love and its confrontations. I had a dream that I wanted Lang Lang to retell this story of the search for harmony on his piano. He did beautifully, he is a poet of the piano, a Taoist of the keyboard, making limits unlimited, and turning water into fire.

Tan Dun and Lang Lang tell Guy Dammann why their collaboration makes perfect sense
Few figures straddle the east-west divide better than Tan Dun and Lang Lang. The two Chinese-born musicians are firm friends – Tan calls Lang Lang his “little brother” – but play together all too infrequently. Busy schedules mean they’re rarely in the same country, let alone the same city, but later this month both visit London to give the UK premiere of Tan Dun’s piano concerto, composed specially for his compatriot. Today, however, Lang Lang’s in India, Tan Dun’s in China, and I’m in London, but we’re having a three-way video conversation about the work.

Read Morehide
Tan Dun, best known for his film scores, has focused as much on bringing western art to China as the reverse. On winning an Oscar for the music in Ang Lee’s film Crouching Tiger, Hidden Dragon, his acceptance speech focused less on his friends, agents and collaborators than on what he saw as his mission to bring down “the invisible wall” dividing China from the rest of the world. “When most people think of a wall in China, they think of a physical wall, the Great Wall which the Han Chinese hoped would keep out the northern races. But I think always of a wall that is much higher, but is also invisible. It stops people seeing into China, just as it keeps Chinese people from seeing out,” he says.”I remember your Oscar speech as if it was yesterday,” pipes up Lang Lang, who has joined us from Mumbai, where he is performing with the Vienna Philharmonic. I ask the “brothers” why “swinging and swimming between different cultures” – as Tan Dun puts it – has always been so important. “When I was at school I stuck exclusively with classical repertoire,” says Lang Lang. “Later, I started to think about what I can do as a pianist, by introducing composers like Bartók or Schoenberg to an Asian audience, for whom these composers are still very new, and by bringing a Chinese sound to America and Europe. That’s why Tan’s concerto is so important, not just for me, but for the world. There’s nothing else in the repertoire that could better symbolise a marriage of western and eastern ways of thinking.”

The two first met in New York in 1999, when Lang Lang played Tan Dun’s first published work, Eight Memories in Watercolor for solo piano. When he finished the eighth movement, entitled Floating Cloud, Tan Dun says he realised he must have composed it specifically for Lang Lang. “I mean, you know Chinese people. We are so kind of shamanistic that we are dreaming more often than not. At this meeting, on the eve of the new millennium, I discovered I had written a piece for someone who wouldn’t even be born for another two years. That kind of feeling only happens at most one or two times in your life. And, many years later, we finally reached this piano concerto, which is about the balancing of fire and water. To me Lang Lang is fire. Lang Lang is water. Through his playing, he really illustrates how Chinese philosophy and Chinese art could and should be. He makes one plus one equal one.” I protest. “We’re talking about the failure of westerners often to understand the Chinese mindset,” I say. “Telling me that Lang Lang is fire and Lang Lang is water is a case in point. Most of us won’t have a clue what you’re talking about.” The composer’s laugh is appropriately melodious – more water than fire. “Water and fire are elements as well as opposites in traditional Daoist philosophy. To me, Chinese culture is all about recognising these elements in things and reconciling the contrasts between them. Water is the lyrical and the fluid in music, while fire relates to the rhythmic energy, the drive and anger. And the reason why, for me, Lang Lang is the perfect pianist is that he has a natural way of bringing these extreme contrasts out, of making the piano – essentially a percussion instrument: you hammer the strings, you don’t bow them – of making it really sing like an ehru [Chinese violin]. Lang Lang’s highest achievement is the way he can bring out the piano’s eastern side, by making it both water and fire. This is the real, deeper purpose of art and music in China.” This is interesting because the very form of the piano concerto – an “argument” between piano and orchestra in pursuit of the logical implications of a theme – is often held up as an exemplar of western enlightenment thinking, as an abstract representation of the dialectical imagination.”Your dialectics are just my yin and yang”, he says. “Ultimately, the piano concerto is about overcoming the opposition between piano and orchestra to make one and one equal one. Just like Hegel’s dialectics, but maybe in the east we have an easier time remembering that there is an essential spiritual dimension to this.” “I believe in dreams more than in reality,” adds Tan Dun. “That’s how I make myself immune to marketing and money. Chinese people, for sure, they know how to make money, but actually the dream is the real engine for us. Musically, what I wanted to do is master a language in which to talk to the dream world. I am so lucky to be a Chinese musician. Meanwhile, I am a world musician, belonging to a marvellous era of genuine internationalism. But it is the dreamland which is my true home. I am a shaman. Both of us are. We want to be shamen to link reality and dreamtime.”

I ask Lang Lang if he too sees himself as a shaman. “Well, you know, I don’t really go in for all that Harry Potter stuff. But I guess if you really touch people, then you are a kind of magician. I learned this in Africa, where I found I really could touch people and make them see the world differently. These were kids who’d never seen a piano before, never heard western music or Chinese music. I saw hope come into their eyes, maybe for the first time. That’s what music is about, for me. Hope. “This is one of the reasons I admire Tan so much. I mean I had to struggle to get where I am, but for him, to achieve what he has achieved after having lived through the cultural revolution, when no one could make real music …” “To have a taste of bitterness for an artist is very necessary,” interrupts Tan. “Only then can you really know what is at the heart of music and art. When I think of all that was banned under Mao Zedong, it is probably this that made me feel the urgency of continuing those ancient Chinese traditions and giving them a new life by bringing them into contact with western musical traditions.”

“We don’t want to have Chinese traditions dying out. China is huge, but what we want people to understand is much more than this market growth and all that stuff: it is the philosophy and culture behind it. And that all comes down to the same thing, which may not make sense in words but makes perfect sense in music: one plus one equals one.” 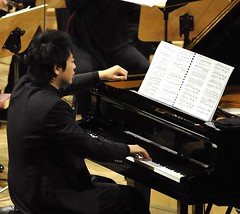 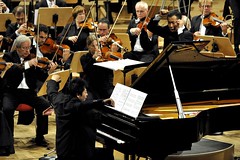 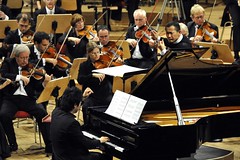 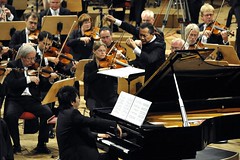 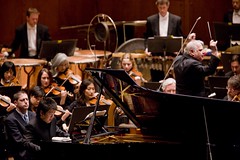 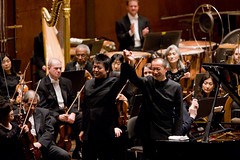 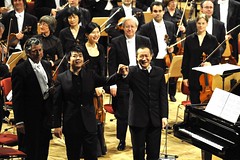 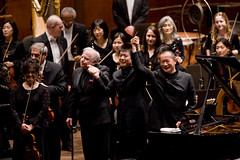 “The orchestral writing is full of striking touches, as when a propulsive episode in the piano is backed up by rhythmically staggered fortissimo chords of slashing strings and clanking brake drums. And Mr. Tan proved good at his word in treating Mr. Lang as a martial artist of the keyboard.”