NPR： What is the Martial Arts Trilogy?

Tan Dun: The Martial Arts Trilogy is my attempt to combine the past three wuxia “film music” pieces I have composed—“Crouching Tiger, Hidden Dragon”, “Hero”, and “The Banquet” into a “music drama”, all built around the premise of the fourth and final piece, “Triple Resurrection”, which is not “film music”, but instead a “music film.”

NPR: “What is the distinction between ‘film music’ and a ‘music film’?”

Tan Dun: From start to finish, I spent a total of twelve years composing music for three wuxia (martial arts) films: Ang Lee’s “Crouching Tiger, Hidden Dragon”, Zhang Yimou’s “Hero”, and Feng Xiaogang’s “The Banquet”; “film music” refers to the music I wrote to accompany those three wuxia films. The three female protagonists in the three films all have something in common, in that they lose their loves and their lives for their ideals. The heroine in Zhang Yimou’s “Hero” (the violin) loses her love and her life for the assassination of the King and for the love of her country; the heroine in Ang Lee’s “Crouching Tiger, Hidden Dragon” (the cello) does so for her wuxia dream; and the heroine in Feng Xiaogang’s “The Banquet” (the piano) does so for revenge and desire. The musical images of these three heroines are interpreted by three different musical instruments in these three “film music” pieces. After completing these pieces, I waited without end for a fourth wuxia film to appear that would help me realize my greatest dream: to write a trio for violin, cello, and piano combined, about the resurrection of the women’s three loves and three lives. But to this day, that film has not yet been made. So, I decided to create a triple concerto called “Resurrection”, which would bring together the themes and musical characters (violin, cello, and piano) of the first three pieces of film music. I am now cooperating with film festivals to organize a competition for young filmmakers, whereby everyone would use this same piece of music I’d written to create a film accompanying it. Once the winning film had been selected, it would become the finale film piece for the “Resurrection” cycle. So “Resurrection” is “a music film”, or a film that accompanies music. It echoes the “film music” of the first three pieces to form a structural unity, linking beginning to end in what is ultimately a “music drama”.

Tan Dun: Before movies were invented, operas completely served the purpose films serve for us today. With music, text, visual art, costumes, and so on, they were the largest integrated art form of their time, and had the widest audience across social classes. In this way traditional operas were truly the original “movies”. Once films were invented, the power of their artistic expression as the “operas of the future” became known, and the medium overflowed with an array of imaginative and paramount works. I’ve written five operas and I’m a fiercely devoted opera fan. I especially love Wagner’s operas and his concept of “music drama”: namely, the idea of writing music that does not need text or a script for the story to be told—music, inherently dramatic, can tell the story itself. Music is able to complete the story or conclude the dramatic arc on its own.  I apply this kind of thinking to the “Martial Arts Cycle”. The Triple Resurrection is not “film music”, but instead a “music film”.

NPR: Does the “wuxia music” (martial arts music) you create have traceable roots in musical aesthetics or music history?

Tan Dun: China’s guqin music has a history spanning thousands of years; the guqin piece “Guang Lingsan: the Emperor and the Assassin” is, in my understanding, the true origin of Chinese wuxia music. This is why for “Hero” I integrated guqin material from “Guang Lingsan”, symphonically remolding and reproducing the essence of the wuxia principle “heart of the qin, spirit of the sword”: as in the tender heart of a musician (qin (琴) is the second character of guqin (古琴), thus indicating here a musical instrument) with the bold, courageous vision of a warrior. The artistic conception of wuxia and of Chinese musical aesthetics both relate to notions of “the greatest sound being hardest to hear” or “the form ending but the meaning continuing”. It is about the power of the implicit and, in turn, of the imagination. This is the dream I pursue in creating “wuxia music”. Of course, my concept of wuxia music is also comprised of two concepts that are very much a part of Chinese history: the yi (艺) and the shu (术), which are the two Chinese characters comprising yishu, or “art”. Yi informs my musical aesthetic and concept, while shu informs my techniques in the composing of symphonic music –techniques that engender a complexly woven blend of textures, harmonies, and performance styles.

NPR: What impact has winning both the Oscar and the Grammy had for you and your music?

Tan Dun: Awards like the Oscar and the Grammy give my music the chance to reach an even wider audience. They bring nontraditional fans into the concert halls and a younger generation of listeners into the opera houses. I like to be challenged by young people, and I like to challenge them in return. I’m grateful for having received an Oscar and a Grammy because it will someday help me achieve my dream: being 99 years old and still seeing young people seated in my audience….

NPR: Will you someday get back together with Yo-Yo Ma, Lang Lang, and Itzhak Perlman, your original collaborators, for a performance of the Martial Arts Trilogy?

Tan Dun: I will! This is in fact what I’d had in mind all along for the Trilogy. Actually, the notion of “Resurrection” has multiple meanings; it is about the revival of love, but it also about the revival of dreams and of hope. There is another kind of resurrection happening too; classical music, much the same as the ancient Chinese wuxia legends, survives by being passed down from generation to generation, and so I’m overjoyed to see that so many young soloists and symphony musicians all over the world enjoy performing the Martial Arts Trilogy. This phenomenon in itself is a new kind of resurrection of Chinese classical aesthetics. For Chinese music to really reach the rest of the world, it needs to offer an aesthetic and philosophical framework through which the West can jointly share in it. Without a cross-culturally viable aesthetic and philosophical platform, Chinese music will not be able to penetrate the West. I look forward to the moment in time when my “wuxia music” is understood and appreciated by the East and West in equal measure. 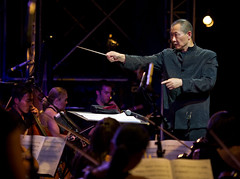 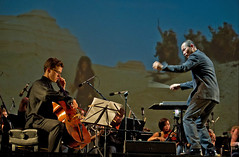 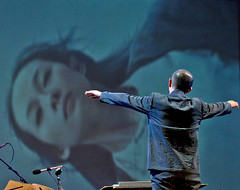 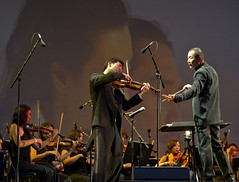 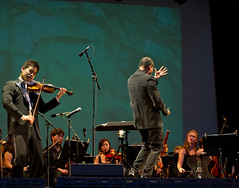 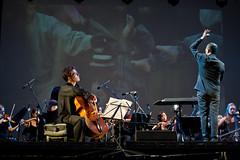 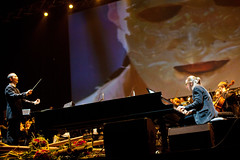 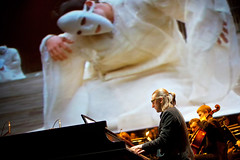 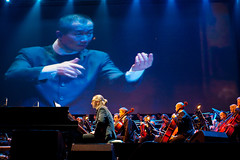 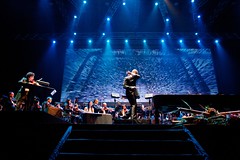 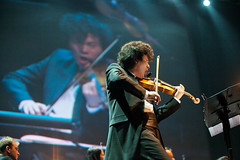 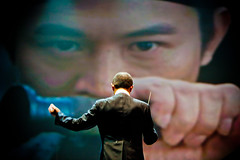 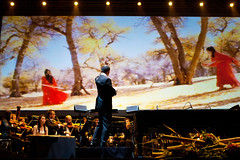 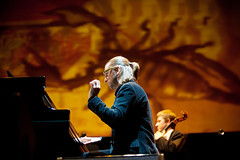 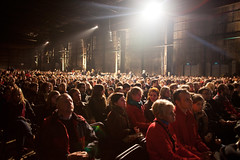 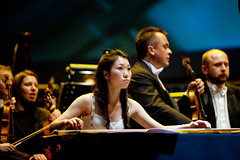 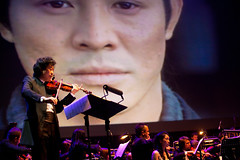 This was an epic, multimedia production, full of big-screen emotions and unabashed melodrama.
— The Washington Post